Once a Month Cooking Newbie

Let's just jump right back in, shall we?  Ok. So, I just tried once a month cooking for the first time. And I'm so excited that I can't stop telling everyone I talk to all about it. Now if you, like me, spend way too much of your free time browsing Pinterest, you probably know what once a month cooking is. But just in case, I'll assume you are more like my brother (though I don't know how you ended up here, if you are) and have never heard of it. Basically, the idea is you spend a whole day cooking up a bunch of meals for the month that you freeze, so you can pull dinner out of the freezer and all you have to do is heat it up. Way less nightly cooking and cleanup. I'd been thinking about trying it for a few months now, but it seemed kind of overwhelming to get started. And honestly, it was pretty overwhelming, but I'm so glad I did it! 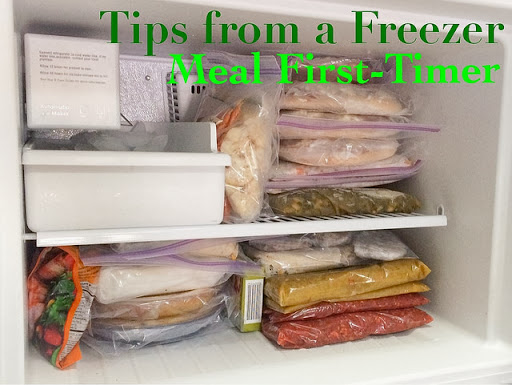 Now that I have all this brand new free time, I figured what should I do with it but start blogging again? And since it's my new favorite thing to talk about, it was the obvious first thing to write about, too. I've taken away quite a bit from with my first experience with once a month cooking that I want to remember for next time. Here's what I've learned. The DOs are all things that worked for me, and the DON'Ts are things I learned the hard way.

DO plan what you're going to make, pick recipes, and buy all your groceries ahead of time. When planning the menu, I looked around at a lot of resources for freezer cooking, but most of them very meat oriented, which wasn't so helpful for me as a vegetarian. I did find a few options, but I decided I wanted to go mostly with recipes we already like that I thought would freeze well. I did try a couple of new things, but I didn't want to end up with a freezer full of experiments that we might not like.

DO figure out what containers you will use and have them ready. I just used freezer bags for everything. I don't have chest freezer, so space was a big consideration. For things that go in pans, I like to use parchment paper to line the pans.  That makes it easy to freeze the contents, then remove them from the pans to put in freezer bags. That means the pans aren't tied up in the freezer, and they take up less room.

DON'T just wing it when it comes to the order that you will cook everything. I would have benefited from a more detailed game plan than I had.

DO consider the current contents of your freezer when planning your menu. I used up some phyllo dough, two containers of cooked greens, and a bag full of bread heels.

DON'T forget to clean out your freezer ahead of time. It was a big pain to be making room for everything as I went. Time when I could have been cooking was spent sorting out and discarding ancient lumps of frozen bananas and other mystery items. I also found a few more things I would have used up if I would have known they were there when I started cooking.

DO pre-prep some ingredients a day or two before, like cooking up a pot of beans in your crockpot, baking up all those bread heels to make bread crumbs, and mixing up a batch of dough in your bread machine.

DO make good use of your kitchen equipment for multi-tasking. It was good to be able to have a batch of bread dough going in my machine, potatoes baking in the oven, and vegetables steaming in the steamer all at once.

DO group the veggies that will be used in multiple recipes and chop or prep them in a batch.

DON'T forget to do that for other like items as well. I shredded a bunch of cheese in my food processor and could have saved myself from cleaning it before shredding cheese for another recipe.

DON'T start at 3:30 on Sunday afternoon. Next month I'd like to divide it into two cooking sessions where I make five things on each day. This month I finished up five meals on Sunday, and had gotten started with four other things. I ended up wrapping up two of those Monday night and two on Tuesday, before finally getting everything labeled and the freezer organized on Wednesday morning. All this dragged it out longer than I would have liked.

Even though it took me longer than I hoped, honestly, I'm pretty thrilled with the results. I can't wait to try it again next month. I think now that I have this experience under my belt, it will go smoother and more quickly the next time.