Since we decided to use two different colors of paint in the bedroom, we had to figure out how to incorporate them both. For a while we considered doing a chair rail and putting the lighter color above and the darker color below. I was thinking about going with a faux board and batten look, but then I decided two colors might make the room look too choppy, since the ceilings in the bedroom aren't very high. And I started seeing all these great wall stencils, so I suggested stenciling an accent wall. James was down with the idea. He gave some input, but he pretty much left the decision of what stencil to choose up to me. Now, my friends and family will tell you that selecting among an array of options is not my strong suit. I dither. One of the great things about being a vegetarian is it makes it much easier for me to order from an menu. 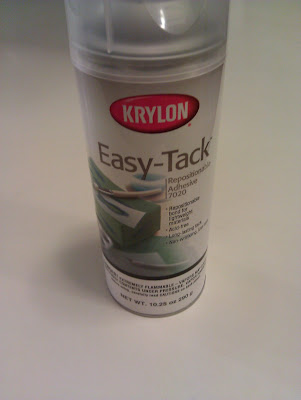 So it took me a few weeks to decide. There are so many gorgeous choices, like this from Cutting Edge Stencils and this from Olive Leaf Stencils. Eventually, after much agonizing, I settled on this damask from Royal Design Studio. Criteria I used to help narrow it down included: not too girly (read floral), not too geometric (I have an upholstered headboard planned that will be very geometric and I wanted contrast), not to much negative space in the design, so as to incorporate a good amount of our darker color into the room, and something more classic than trendy so that we won't quickly tire of something that took hours to do. The 10% off coupon code for this seller from Young House Love (YHL10) didn't hurt, either. 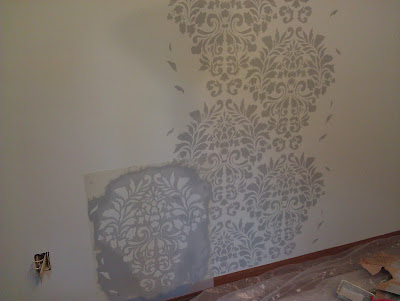 Compared to deciding which stencil to use, actually stenciling was a breeze, despite the fact that it took about eight hours to finish. I did a fair amount of googling about stenciling before I started. I wanted it to be as easy as possible. The most important tip I found was to use repositionable spray adhesive. I bought the adhesive seen above at Michaels. You spray the back of the stencil, and it keeps the paint from bleeding under the stencil. It worked like a charm. The edges came out really crisp. I took the stencil out to the back yard, laid in the grass, and gave the back a couple of thin and even coats with the adhesive. 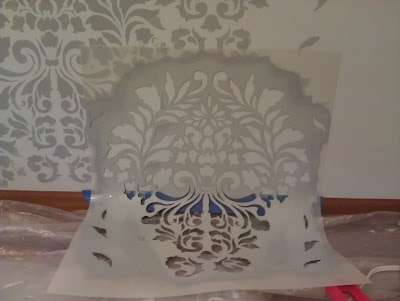 The stencil I chose was 21 x 24.5 inches, which helped move the process along, so I shudder to think of how long it would have taken with a smaller stencil. I started in the center of the wall at the ceiling, which is recommended if you are doing one wall to make sure it comes out evenly on either side. The process was to position the stencil on the wall using the guide marks and the level. The stencil has extra little floating cut outs outside the main design that you use to match it up. You can see them in the pictures above. I used a level each time I repositioned the stencil just to make sure it didn't get wonky. Then I would roll the paint on in a couple of thin coats using a small roller, like this. I just used regular, full strength latex wall paint. I didn't worry about getting absolutely perfect coverage, since you with a pattern like this you really notice the big whole effect more than the tiny details. We bought a quart of Smoke Screen, which was more than enough for this project. Over time, it did gum up the stencil, so halfway through I washed it off with warm water, and then reapplied the spray adhesive. You could probably avoid the washing step if you thinned the paint, or used craft paint instead of latex. You'd still need to reapply the spray adhesive, because it wore off after a while. 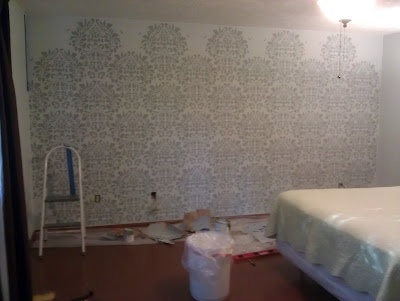 I was able to do the bottom of the wall and the corners by taping the baseboard (or opposite wall, for the corners) and bending the stencil. You can see that above the previous paragraph. That didn't work for the top of the wall, though because gravity worked against me. Even with tape, the stencil wouldn't stay stuck to the ceiling, so after I had finished nearly everything but the top, I cut the stencil. Above you can see the parts I needed to cut the stencil to do. The bottom corners didn't really work that way either, because two folds was too tricky. 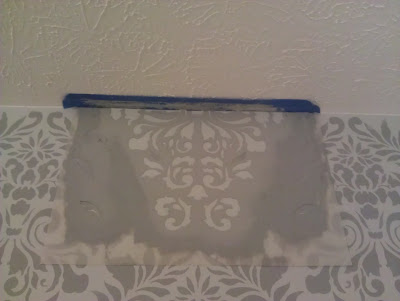 And here you can see the stencil after I cut it. I wish I would have taken a picture of how I marked the stencil to cut it, because it worked well but is hard to describe. I stuck the stencil on the wall, matching it up to one of the designs I had already stenciled.  Then I took my level and lined it up to the tops of the designs on either side and marked the line straight across the stencil with a Sharpie. I peeled the stencil off the wall and cut it with a regular pair of scissors. I had no plans to use the stencil again, so I didn't mind cutting it. It made it far easier to finish the stenciling. 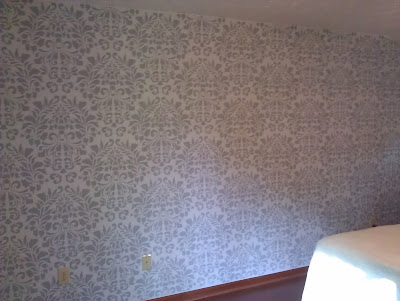 I absolutely love the results. It really adds a lot of interest and gives a whole different feel to the room. I'm pleased with the colors and the pattern. It was well worth the effort.  I was surprised that even though it was fairly time consuming to do, it actually went really smoothly. I didn't really have any trouble. I just turned on some music and cranked it out. Next time I'll talk about installing the new floors, which you can see a bit of here. 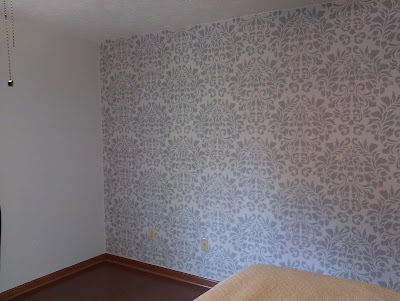 Posted by Sarah in Indiana at 8:07 AM